In Central Dalmatia, tourists have an incredible opportunity to step into the fantasy world in the blink of an eye, right into the cinematic scene, to the very locations where the legendary HBO series ‘’Game of Thrones’’ was filmed.

The whole world has long since known that one of the most watched and popular television series in history was filmed in Croatia. And regardless of the fact that the filming and broadcasting of the series has now been completed, fans’ interest in visiting the series’ filming locations hasn’t ceased.

Owing to this mega project, Dubrovnik has become the dangerous city of King’s Landing, the stronghold of the powerful Lannister family. But it isn’t only the ramparts, towers, and lookouts of this city which have become a draw for fans of the cult series, there are also numerous locations across Split-Dalmatia County that are enthusiastically visited by fans of the series.

Split and Split-Dalmatia County were attractive to the authors and creators of the series precisely because of their original historical locations, and because of the fact that the scenery was original here and that it only had to be adapted to the story of the series with the use of some special effects.

Split, a city under UNESCO heritage, with its perfect historical construction, delighted GOT screenwriters who, at the city’s very heart, discovered fascinating locations for filming the series. And then they realised that the environment of Split is just as powerful, deciding to shoot some of the most important scenes of the global spectacle in this part of Croatia, and then to place all of those those locations on a map of the GOT locations that every serious fan of the series must visit.

In order not to wander aimlessly, the Split-Dalmatia County Tourist Board has made sure to invest significant marketing resources in promoting this project and has prepared an attractive map of Game of Thrones filming locations.

This truly monumental space, which stretches beneath the famed Diocletian’s Palace, is breathtaking in its beauty. The stone structures, the arches, the secret passages, the impression of cold that the underground world provides are all part of the home of the former Roman emperor Diocletian.

These cellars are an unavoidable stop for many tourists. And since this very old area in Split became a GOT site, numerous fans of the series have come to see it. Desiring to feel the atmosphere, the mystique of the dungeons, the room where the powerful Daenerys locked her famed pet dragons.

Here, among the smooth stone walls below Split, from which dragons cannot escape, some of the cult scenes were filmed.

After the cellars where the stone atmosphere creates a pleasant cold even during the highest summer temperatures, a climb to Peristyle awaits tourists. This is a fascinating imperial square, with its open-plan setting. And then an easy walk to the streets of Split, across the old stone floor, past the facades of the houses where people still live today.

Here, in the veins of the city, Daenerys’s slaves were plotting around the fire to conspire, thinking up their new moves. In the palace, the Mother of Dragons filmed numerous scenes, including the one where she sat on her throne.

The view of it is fascinating, the view of a huge powerful building on the top of the mountain near the sea, from which a beautiful view of the valley, Split at the foothills, the coast, the islands is offered. In the GOT series, it is in this historic building that the scenes of the largest of the great city-states of Slaver’s Bay, Meereen, were filmed.

Klis Fortress came to the forefront in the season in which Daenerys conquers the city of Meereen. Fans of the series will remember her as the site of a masses of scene, packed with slaves dressed in modest togas, who flooded the gravel paths leading to the medieval building.

This is exactly where Khalesi publicly impaled the disobedient city authorities for everyone to witness.

Remember Braavos, a seaside town, and the scene where young Arya mysteriously stands on a pier? This scene was filmed in Kaštel Gomilica, a small town not far from Split, and at its heart is a medieval castle belonging to Benedictine nuns.

It was in this small, peaceful, beautiful town that Arya transformed into Cat, took on a different identity, and found her temporary home in the home of fishmonger Brusco and his daughters.Upravo u tom malom, mirnom, prelijepom gradiću,

We definitely recommend a visit to this film site, where you can enjoy the beauty of the old town, historical buildings, and movie scenery right next to the crystal clear sea.

Can anything be done without it? Can GOT be filmed in this area without the film cameras stumbling into one of the most gorgeous cities on the Croatian coast, among the alleyways framed by towers, into a beautiful, living and breathing UNESCO living monument? No, it can’t.

In the series, Trogir ‘’starred’’ as the Qarth trade port, in which wizards imprisoned Khaleesi’s dragons. It is an impressive building that you should definitely visit, to feel the spirit of a city that has preserved its old soul in modern times.

Another location near the city of Split, which, due to its exceptional natural beauty, has become the perfect getaway for locals.

The screenwriters discovered it and spread it around the world, and it will remain interesting in a scene that was gladly watched and commented on among the male population of GOT fans. This is a scene in which Missandei, one of the series’ most beautiful actresses, appears, as does the bathing scene in a clear river. That river is Žrnovnica, there is also a water mill known as Antoničin mill in which the hosts grind various types of flour to this very day.

Also nearby is a quarry where the extras practiced their war scenes. This is where the shot was taken in which Daenerys arrives in front of the walls of Meereen, and the one with a duel between Daaria Naharis and Meereen’s champion.

The mighty mountain above the Makarska Riviera with its perfect stone boulders, vantage points, chasms, wild unobstructed nature, numerous gravel paths, the danger that threatens the uninitiated, and the sort of pride that only sheer perfection can possess, served as the backdrop ideal for GOT.

And that was for the scene with the flying dragons, these mighty winged creatures, which, from the heights of the Dalmatian massif, plunged toward the sea, into the unbeatable beauty of this region. 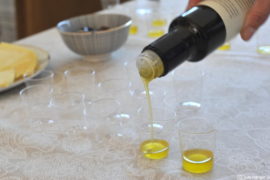